Since we can’t see soundwaves as they move through the air, we’re going to simulate one with rope and a friend. This will let you see how a vibration can create a wave. You’ll need at least 10 feet of rope (if you have 25 or 50 feet it’s more fun), a piece of tape (colored if you have it), a slinky, and a partner. Are you ready?

1. Give one end of the rope to your partner.

2. Stretch the rope out so that it is a bit slack.

3. Now move your hand up and down. Feel free to do it several times in a row. Your partner should keep his or her hands as still as possible.

4. Watch the waves move from your hand to the other end of the rope.

6. If you wish, you can try to time your vibrations and create waves with specific frequencies. A frequency of one Hertz is fairly easy to do (one rope shake per second). Can you create rope waves of higher frequencies? You may find that your arm gets tired pretty quickly!

This is the way energy travels. Why is the rope wave energy? Because the particles moved a distance against a force. Work was done on the particles. In fact, when you shook the rope, your energy from your body moved across the room with the wave and was transferred (moved to) your partner. Your partner’s hands could feel the energy you put into the rope in the first place. The work you did on the rope was transferred by the rope wave and did work on your partners hand. You have moved energy across the room!

Now… let’s add another element to this experiment…

1. Put a piece of (colored if possible) tape in about the middle of the rope.

2. Tie your rope to something or let your friend hold on to one end of it.

3. Now pull the rope so that it is a bit slack but not quite touching the floor.

4. Vibrate your arm. Move your arm up and down once and watch what happens.

5. Now, vibrate your arm a bunch of times (not too fast) and see the results. Notice the action of the tape in the middle of the rope.

For example, in a water wave, the medium is the water. Your hand moved up and down, but the wave created by your hand moved across the room, not up. The wave moved perpendicular to the motion of your hand. Did you take a look at the tape? The tape represents a particle in the wave. Notice that it too, was going up and down. It was not moving along the wave. In any wave the particles vibrate, they do not move along the wave.

Now that you’ve seen a transverse wave, let’s take a look at a longitudinal wave. Here’s what you do:

1. Put a piece of tape on one slinky wire in the middle or so of the slinky.

2. Let your friend hold on to one end of the slinky or anchor the slinky to a chair or table.

3. Now stretch the slinky out, but not too far.

4. Quickly push the slinky toward your friend, or the table, and then pull it back to its original position. Did you see the wave?

5. Now do it again, back and forth several times and watch where the slinky is bunched up and where it’s spread out.

6. Notice the tape. What is it doing? 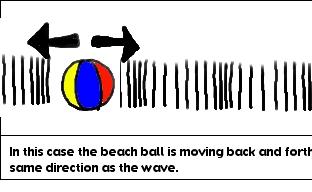 What’s the Difference between Amplitude and Wavelength?

Here’s an easy way to get a feel for amplitude:

1. Put a piece of tape in about the middle of the rope.

2. Tie your rope to something or let your friend hold on to one end of it.

3. Now pull the rope so that it is a bit slack but not quite touching the floor.

4. Your friend should hold their hands as still as possible.

5. Vibrate your hand but only move it up and down about a foot or so. Have your partner pay attention to how that feels when the wave hits him or her.

6. Now, vibrate your hand but now move it up and down 2 or 3 feet. How does that feel to your partner?

7. Have your partner do the vibrating now and see what you feel.

1. Tie your rope to something or let your friend hold on to it.

2. Now pull the rope so that it is a bit slack but not quite touching the floor.

3. Your friend should hold their hands as still as possible.

4. Now begin vibrating your hand fairly slowly. In this case, it works better if you move your hand in a circle.

5. Try to make a wavelength with the rope. In other words it will look like you’re playing jump rope.

6. Now try a one and a half wavelengths.

7. Can you get two or more wavelengths? You’ve really got to get your hand moving to get it.

In this image, the left wave is ONE wavelength, the middle is 1.5 wavelengths, and the right is TWO wavelengths.  See the difference?

Did you notice how the frequency of your hand determined the wavelength of the rope? The faster your hand, moved the more wavelengths you could get.